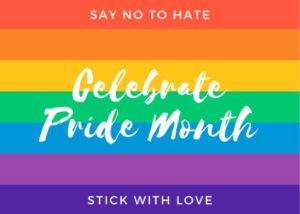 June is Pride Month! Keep reading to learn about how we can celebrate Pride and champion LGBTQ+ rights and equality not only this month, but all year long.

Celebrating Pride
LGBTQ+ Pride Month is celebrated annually in June to commemorate the 1969 Stonewall Uprising. In the early morning of Saturday, June 28th, 1969, police raided the Stonewall Inn, a bar in New York City’s Greenwich Village. The Stonewall Inn had become one of very few “safe” spaces for members of the city’s LGBTQ+ community, in particular LGBTQ+ youth who were homeless due to non-acceptance from families. The raid on Stonewall was not spontaneous, but rather the latest in a series of targeted raids and anti-LGBTQ+ harassment. In addition to arresting the bar’s employees, police officers singled out drag queens, cross-dressers, and transgender patrons for arrest.

In a display of “enough is enough,” bar patrons and community members fought back. These six days of protests, demonstrations, and conflicts with law enforcement would become known as the Stonewall Uprising (also known as the Stonewall Riots or Stonewall Rebellion). While historical accounts of Stonewall vary, the response marked a pivotal moment in the fight for LGBTQ+ rights, justice, and equality and is widely regarded as the catalyst for the modern LBGTQ+ rights movement. To honor and commemorate Stonewall, June was chosen as Pride Month.

While progress has been made for LGBTQ+ rights and equality, there is still much work to be done. Pride is a time to appreciate community and diversity, celebrate and honor the progress that has been made in the LGBTQ+ community, take action to continue the work towards intersectional equity and justice, and champion love, inclusivity, and unity.

A Handful of Resources to Honor, Commemorate, and Celebrate Pride: