Giving Back: The 70-year tradition of Pledge Night

Pledge Night has been a tradition of Wyndham Lawn Home for Children since 1952. The original recipient of the residents’ charity was the Isabelle Home for Babies orphanages in Pusan, Korea (now Busan, South Korea). The home provided food, clothing, and shelter for 50 children ranging in age from newborns to 5 years-old who were orphaned or abandoned during the Korean War. The money was collected a penny at a time from Wyndham Lawn children during Sunday school, “with the purpose of giving it to someone who needed help even more than they did.” The $83.24 donation was collected over a period of two years and w

as personally delivered to the orphanage by General James Van Fleet, a Lockport resident who was serving with the military in Korea at the time.

Since then, young people at Wyndham Lawn have continued the tradition of gathering every year at the holidays and deciding on a cause they would like to raise awareness for. At one point, Pledge Night evolved into a bit of a competition between living units, where representatives would come together with a pitch for their charity and spend time with each other discussing and sharing their opinions, ultimately deciding on one organization to advocate for. The representatives would then work as a group to create a presentation to share with the rest of campus, educating their peers on why their choice needed their generous donation.

In more recent years, the process remains much the same, with less of an aspect of competition. Youth from each cottage are invited to a planning meeting hosted by adventure recreation staff that is aimed at explaining the history of the event and ways in which youth can get involved. Youth from each cottage volunteer to represent their peers, and are tasked with selecting a charity that is significant to them as a cottage. Representatives work with their cottage mates to do some preliminary research into their charity of choice, and develop a short pitch as to why theirs should be the charity selected for Pledge Night. After a few weeks, the representatives from each cottage are invited up to the conference room in the school for a special evening of pizza and wings, and to pitch their charity to the group. Administrators, supervisors, and cottage staff are encouraged to join the process and ask the youth questions following their pitch. Once the pitches are completed, the youth are responsible for deciding as a group on a single charity to pursue for Pledge Night. The cottage whose charity is selected then takes a few weeks to prepare a more formal presentation that is debuted at the campus holiday dinner in late December. Everyone on campus gathers in the school cafeteria for a family style holiday meal prepared by the kitchen staff. Before the meal, the youth representatives deliver their presentation, sharing with their audience why they should “pledge” a donation to their charity during the holiday season. After gathering all donations, youth are invited to deliver the donation to their charity and make a meaningful connection with the people they worked hard to support.

Organizations that have benefited from Wyndham Lawn Pledge Night collections over the years have included:

1990: S.E.T.A (Students for the Ethical Treatment of Animals) 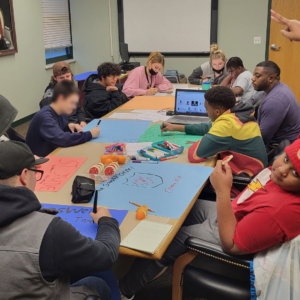 In 2022, we heard very thoughtful cases for One Tree Planted, Toys for Tots, The Salvation Army, St. Jude Children’s Research Hospital, Roswell Park Cancer Institute, ASPCA, and the Rainforest Trust. Our group came to settle on supporting all seven charities. They spent the following week doing research, dividing the work, and sharing information about the history of the organizations, the services they offer, and how to support them.

If you would like to support our youth in their effort to promote these organizations, we are accepting cash donations through January 31st. We will gather these donations and present them to the organizations in a check. Cash donations can be dropped off to either Lynanne Kent at the Wyndham Lawn administration building, or Kerry Bumpers in her office at the Henrietta G. Lewis School Campus School. We are also accepting bags of clothing to donate to the Salvation Army, and we will accept blankets or pet supplies for the ASPCA.